HomeCelebrityPink and Her Adorable Family Light Up the 2019... 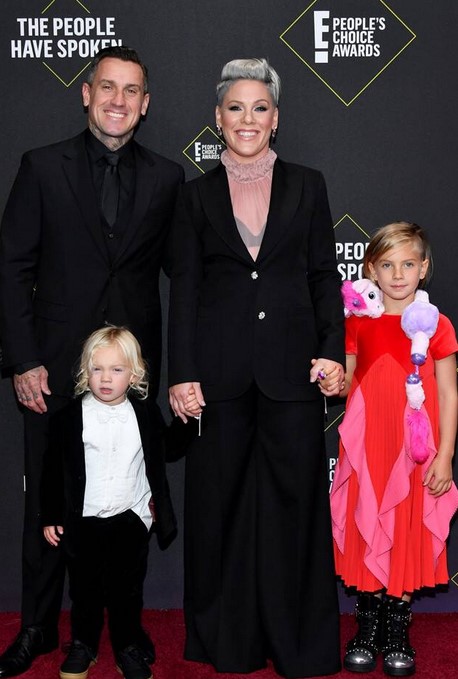 The People’s Champion has arrived!

Pinkwas joined by her nearest and dearest when she made one fierce entrance to Sunday’s 2019 People’s Choice Awards, where she’s being honored with the People’s Champion Award. The world-famous performer had fans in awe as she walked the red carpet alongside husband Carey Hart, and their two little ones, 8-year-old Willow Sage and Jameson Moon.

So how do Willow and Jameson feel about their mama’s special night? “You better say the right thing,” Pink teased when E!’s Jason Kennedy quizzed the adorable kiddos. Let’s just say Jameson was more focused on his snacks than walking the red carpet.

Pink then touched on where she’s at in her career, sharing, “It’s been amazing. It’s such a wild ride. This last one was really sweet because a lot of my dancers are getting married and thinking about other things. I have two kids now and Carey does his own thing so it’s a wild ride. I love it. We’re a family. My team is the best team in the world.”

Tonight’s ceremony celebrates Pink’s lifelong commitment to a number of charitable organizations, which include Planned Parenthood, the Human Rights Campaign, Autism Speaks and many more.

“My dad’s nickname when I was little was ‘Mr. Cause,’” she told us. “He was a letter writer, and I was marching on Washington with him and the other veterans… It’s just important. I don’t like bullies and I don’t like injustice. I have a big mouth and a thick skin to be able to fight battles. There’s a lot to be down right now. The time is now.”

A star who uses their platform to effect positive change? There’s nothing better!

Ahead of the PCAs, the proud mom-of-three remarked about receiving the award, “There are so many wonderful organizations and individuals doing extraordinary things in our communities every single day. These are our everyday warriors and champions. They teach us and our children that it’s cool to be kind and that change is possible. I feel honored to be a small part of that change and will continue to be a champion for the truth and for open minds and open hearts.”

Pink’s critically-acclaimed discography also highlights her passion for giving back, with songs like “Perfect” and “What About Us” serving as anthems for inclusion, acceptance and self-love.

In addition to taking home the People’s Champion Award, Pink stands to win Female Artist of 2019 and Concert Tour of 2019 for Beautiful Trauma.