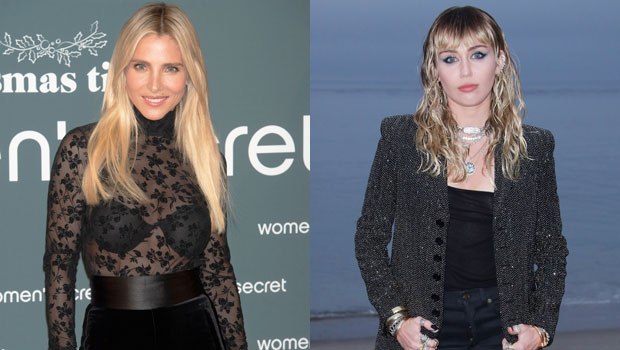 There’s no love lost between Liam Hemsworth‘s sister-in-law Elsa Pataky and his ex Miley Cyrus. The 43-year-old Spanish beauty is happily married to Liam’s older brother Chris Hemsworth, 36, and is giving fans an update on how the 29-year-old Hunger Games star is doing since the breakup. In the process she also threw shade at Miley, 26. Elsa was in Madrid for the launch of the Christmas campaign of lingerie brand Women’s Secret, for which the mother of three is a brand ambassador when she made the surprising comments.

“My brother-in-law, well…After a relationship that you’ve dedicated ten years to, he’s a little bit down, but he’s coping well. He’s a strong boy and he deserves the best, I think he deserves much better,” Elsa candidly revealed. Miley and Liam fell in love in 2009 while filming The Last Song. In June of 2012 they got engaged but broke up the following summer. Miley then went into a wild child phase with her album Bangerz and that infamously raunchy MTV performance with Robin Thicke. But by late 2015 she was on a campaign to win Liam back, which she successfully did.

The couple lived together happily in Malibu, but tragically lost their home in the Nov. of 2018 Woolsey brushfire. A month later they decided to make the ultimate commitment, tying the knot just before Christmas at her Nashville home. But sadly, things fell apart by summer, as she was photographed making out with Brody Jenner‘s ex Kaitlynn Carter, 30, in Italy while Liam was in Australia. The following day on Aug. 10 her camp announced the couple had separated and Liam wasted no time in filing for divorce on Aug. 21.

Fortunately, Liam found comfort by moving in with Elsa and Chris in their Byron Bay, Australia home following the split. “You always find support in your family, and he’s joined at the hip with his brother, who has been there to give all the strength he needed,” Elsa revealed about how Liam handled the breakup.