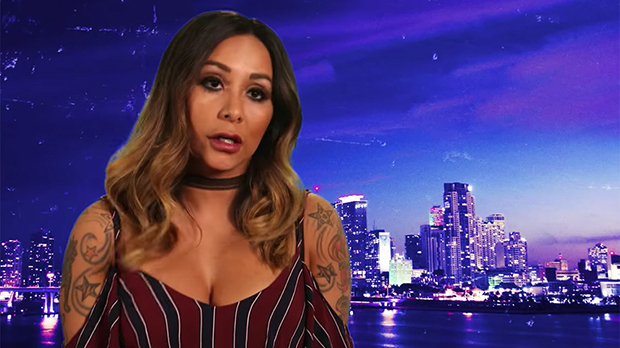 There’s a specific grievance that Nicole “Snooki” Polizzi, 32, had with Jersey Shore before retiring from the show, according to an insider who EXCLUSIVELY spoke with HollywoodLife! Of course, Snooki didn’t go into too much detail about the drama while announcing the reasons behind her decision to leave on the Dec. 6 episode of her podcast, but our source did. “Nicole felt the show was heading in a direction that she wasn’t happy with so she left the show…She did not like how everything played out after Angelina [Pivarnick’s] wedding and feels she’s being painted unfairly,” our source revealed.

After Angelina tied the knot with Chris Larangeira in front of her Jersey Shore co-stars on Nov. 20, she apparently “hasn’t forgiven” the bridesmaid speeches that Snooki — in addition to Jenni “JWoww” Farley and Deena “Nicole” Cortese — delivered afterwards, another source previously told HollywoodLife. “[Snooki] feels awful and never tried to ruin her day,” our source familiar with Snooki’s side of the story now tells us, after the other insider claimed that the bridesmaids called Angelina the “the Staten Island dump” and poked fun at the number of times the bride has been engaged.

Wedding drama aside, Snooki has new priorities to worry about. “She wants to focus on her family and business and not the drama,” our source tells us. Snooki has her three kids Lorenzo, 7, Giovanna, 5, and Angelo, 6 Mos., to think about, in addition to her husband Jionni LaValle, 32. Jersey Shore wasn’t Snooki’s only source of income as well, since she runs an online clothing and makeup store, The Snooki Shop, which now has a physical location in downtown Madison, New Jersey. Both her family and business have been allegedly threatened in the wake of recent Jersey Shore-related drama, since Snooki claimed on last Friday’s podcast that her family had been receiving “death threats” and that fans wanted to boycott her store.

Snooki had a laundry list of reasons as to why she’s leaving Jersey Shore on the Dec. 6 episode of her podcast, It’s Happening with Snooki & Joey. “The main reason [I quit the show] is really….I just can’t do it anymore. Literally, leaving my kids to film it is really hard on me. I try and quit every single day. I just hate being away from the kids. I don’t like partying three days in a row. It’s just not my life anymore. I want to be home with the kid. It’s just really hard for me to leave the kids and film the show,” Snooki had announced.

The MTV star also hinted at the drama our source touched on, saying on the podcast, “Our show, Jersey Shore, is about family and making fun of each other and having a good time and laughing and just knowing that it’s all in good fun. Lately, everything is so serious. It’s not about a team anymore. Fans are against one another when it comes to a cast member. I don’t want that. I’m not leaving my kids for DAYS on end to film this show when that’s the result of it. I don’t like the turnout of it. I don’t like the person I’m portrayed as. It’s getting to be a little too much.”

Snooki is leaving ahead of the 2020 premiere for the second half of Season 3 of Jersey Shore Family Vacation. She reunited with her co-stars for the revival show that premiered in April 2018, but had been with the series right from the start since Jersey Shore’s premiere in 2009!